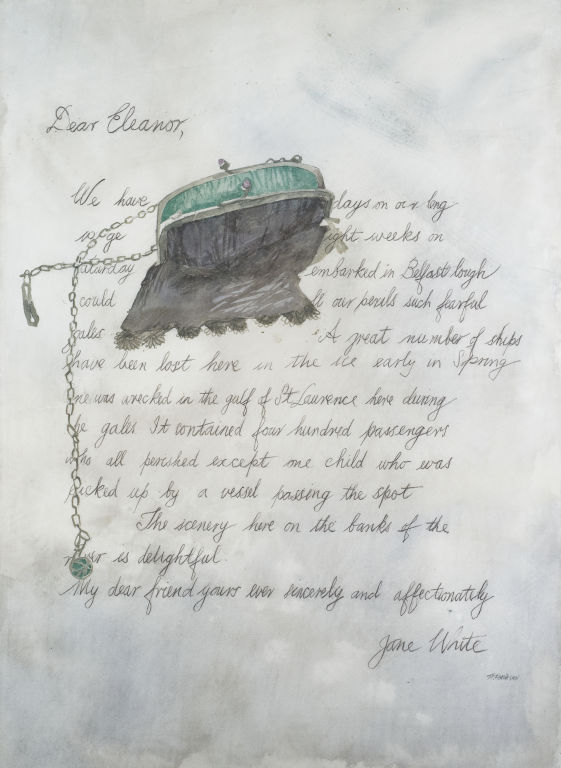 After his return from New York the artist also painted a series of ‘Emigrant Letters’ (1974/5), using phrases from the letters as extensions to the generic title. The New York sabbatical triggered the interest. However an old friend, the botanist Norman Caruthers (originally from Lisbellaw, Co Fermanagh) who had sparked an interest in plants for the artist, also had a collection of letters of people who had emigrated to America – many moving there totally out of the blue to make a better living. These people wrote back about their journey, the new country and how they gradually made a living for themselves.

Flanagan drew on some of these available letters but also invented some of them. They were often written in a florid, cursive style of writing. Their previous experience of being taught writing at school in Ireland would have entailed copying a lead sentence by the teacher several times. There is something of a ‘yearning’ encoded into the graphic notation of these letters that comes out of that learning by rote – a thinking long. It is this that Flanagan refers to when he says he was ‘… moved by a kind of poignant naiveté in so many of the letters’. [T.P. Flanagan, Notes on Selected Pictures by T.P. Flanagan and J.K. Jamison, in T.P. Flanagan, by S.B. Kennedy, Four Courts Press, Dublin in association with the Ulster Museum, Belfast,1995]

The dilemma of emigration is that the emigrant seldom becomes fully integrated by the adopted culture but has lost something, perhaps irretrievable, from the native culture. Education carries the same gain and loss, especially moving from a working class background into the potential liberation education may provide.

T.P. Flanagan’s depiction of these letters often contains a rose cutting, laid diagonally as if in a gesture of respect to the nostalgic condition of emigration but also to assist his picture making. He was also as much interested in their material qualities – their foldings, stainings and seepage -  as in their literary or sentimental content. Some of the letter writers would request plant seeds to be sent over from Ireland and often would receive these seeds secured in the folds of the letter. When the seeds matured into plants they would remind them of home. On their extended Atlantic journey the seeds would imprint copies of themselves into the creases of the folds of the letter. In this state Flanagan also records a bio-graphic history.

Extract from 'T.P. Flanagan - Correspondences' by Professor Liam Kelly.  See here for the full essay.  The text has been reproduced through the T.P. Flanagan Collection project supported by The National Lottery Heritage Fund, the Art Fund and the Friends of Fermanagh County Museum